The crooked nose, commonly a result of a childhood injury, also occurs secondary to previous nasal surgery. Additionally, it can be hereditary and/or congenital. In other words, some people are just born with as it compensates for an asymmetric face. In fact asymmetry in the face is very common, and those with one side of the face smaller than the other will often have their nose lean toward the smaller side. On a person with an asymmetric face and a crooked nose, if we make the nose completely straight, the face will look imbalanced and heavy to one side. It will look strange. So on occasion in order to provide the most aesthetically appealing outcome, it may be best to not make the nose completely straight, still leaving it with a slight influence one way so the face appears in balance.

Most commonly a crooked nose is due to a septal deviation. Although it is commonly thought that the nose has to be broken and reset to get it straight this is usually not the case. In fact by performing straightening and strengthening maneuvers on the septum usually the nose can be brought into midline. Spreader grafts, septal struts and a new minimally invasive bow tie suture are just some of the techniques Dr. Dayan uses to get the nose straight. Less commonly, the nasal bones are deviating in which case fracturing and resetting the nose may be necessary. However using small, precise instruments this can be done by a microfracture technique, much like a gentle tap on an egg shell will weaken the shell. The nasal bones are made malleable and then set into better alignment, resulting in little to no bruising and swelling around the eyes. Afterwards, a splint is placed on the nose for 7 days to make sure it stays in its new position. Patients are almost always surprised to find out how much easier the recovery is than they had expected. 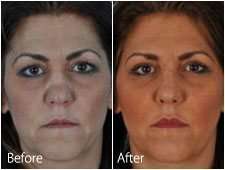 The saddle nose is when the bridge of the nose has fallen and appears scooped out. This most commonly occurs following injury to the septum. It is frequently seen in boxers and other athletes that have been hit in the nose. Surprisingly the most common sports related injury to result in nasal fracture is softball!. It is also seen in those who have had a previous cocaine habit and have lost their nasal septum. The cocaine can destroy the inside of the nose and “eat away” at all the supporting structures of the nose.

These patients require rebuilding of the nose from the inside out. Most commonly they will need strong support to the nose and a cartilage graft from the ear, rib or donor rib will be required. Although this is usually done through an open approach, there is particular advantage to doing it through a closed approach because the blood supply to the graft is better, and Dr. Dayan has noticed the survival of the graft is better. I almost always treat the saddle through a closed approach. 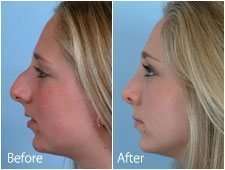 Reducing a hump on the nose has many detailed intricacies that have to be considered. If Steven H. Dayan, M.D. wanted to reduce the height of the bridge on one of his terra cotta clay sculptures, he could simply shave it down. However, this is not the same for the real nose. Prior to reducing a hump it is important to take into consideration the breathing function, the thickness of the skin, the height of the nasal root (where the nose starts) and the transition of the bridge into the tip. Most novice surgeons use a bone chiseling instruments and a hammer and forcefully separate the hump from underlying important structures. However, it is very important to delicately maintain the inner lining of the nose as well as make sure the nasal bone is smoothed down to a new height that is aesthetically pleasing.

In order to maintain a smooth dorsum we rarely, if ever, break the nose, but instead frequently use a special diamond burr that polishes the bone to a sculpted finish. An aesthetic eye is important to achieving an appealing dorsal line. Too much reduction and the nose will look scooped out and “pig-like”, too little and a hump will still be evident. Interestingly, over the years Dr. Dayan has had increasingly more patients requesting the slight hint of a hump (convexity). This is more popular with our European patients and seems to be more fashionable in Italy, Croatia and Russia. But most males want a straight dorsal line similar to Michelangelo’s David and most females request the slightest hint of curvature in the bridge (Ashley Simpson like). You can fine tune your desires by seeing it morphed out on a computer image. During a rhinoplasty consult, your picture can be altered to identify which bridge height is the best fit for you.

The bulbous nose tip is a wide round tip that often lacks definition. It often becomes a focus of the face and drives attention away from the eyes. Narrowing the bulbous nose tip, bringing it into balance with the bridge and blending it into the surrounding facial features is the aesthetic goal. One concern is that a bulbous nose tip often can be a predisposing condition to nasal obstruction once narrowed. It is very important that during rhinoplasty measures are taken to prevent recurvature of the far end of the lower most lateral portion of tip cartilages back into the nose as this can compromise the external nasal valve and impede air flow. Many physicians prefer to treat the bulbous nose tip via an open approach, while others through a delivery approach. However, the bulbous nose tip, when treated through these approaches, is at risk for post surgery swelling, negating the benefits from reduction and narrowing of the cartilages. Additionally, based on research and experience, it is Dr. Dayan’s opinion that open methods also put a symmetric tip at risk for asymmetry afterwards. Using a technique we developed called sandwich grafting we have been able to successfully narrow the bulbous nose tip through a closed approach with minimally invasive maneuvers. Additionally our unique approach also improves the airway and strengthens the nasal valves. 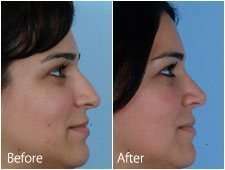 The long nose or the “tension nose” is usually associated with a “hanging lip” or a short distance from the bottom of the nose to the upper lip, and a nose that sticks out far from the face. Frequently, there is too much cartilage in the septum, and we have to remove cartilage from the septum and allow the nose to fall closer to the face. Additionally, we may have to shorten the length of the septum and the ends of the lower tip cartilages to allow the tip to rotate up ever so slightly. For a male, the angle between the bottom of the nose and the lip is most aesthetically ideal if around 90 degrees. The ideal angle for a female is 105-110 degrees. Although this can vary from person to person, it is very important that measures are taken by the surgeon to not over shorten the nose which can result in an over-operated, undesired look. 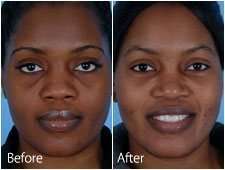 The wide, flat nose is commonly associated with the “ethnic” nose. Although most people and novice surgeons think it is best to narrow the nasal bones, this actually won’t work at best and at worse can lead to a bizarre appearing nose that becomes obstructed. Most often, these noses are best treated by building up the bridge and leaving the bones alone, making the nose look thinner and more defined. Materials that are best used to build up the bridge include extra cartilage taken from inside the nose. If that is not enough then cartilage can be taken from behind the ear or rarely from a rib. Some physicians, especially in Asia like to use foreign implant materials, and while sometimes these materials work well other times infection of the implants can occur with drastic results. Some physicians are using non surgical fillers in the nose, such as Restylane™, Juvederm™, Radiesse™ and Artefil™ but extreme caution must be exercised by a physician using fillers. Getting a good and safe result is highly dependent on how it is injected.

The short nose is often due to a lack of septal cartilage inside the nose. Sometimes it can occur from a previous surgeon who removes too much cartilage from the nose. Occasionally it can occur because of a previous injury. Often times these are the patients who get called “Miss Piggy” because you can see up their nostrils from the frontal view. If it happens from a previous surgery, it can appear very unsightly and is tell tale sign they had a bad nose job. These patients are best treated by adding cartilage to the nose. Usually the septum can be made longer, (caudal septal extension graft) or with extended spreader grafts. Other times a tip graft may work best. The key is to get the nose longer and the tip rotated down so that one is no longer looking into the inside of the nose.