“I was beginning to feel a lot older than I am chronologically,” says Mickie who turned to injectables and non-surgical procedures at Dr. Dayan’s office to reverse her signs of aging. Mickie chose Dr. Dayan because of his reputation for being outstanding with injections. Mickie lives in the Northshore community of the Chicago area, and his name was frequently used amongst her peers and colleagues. 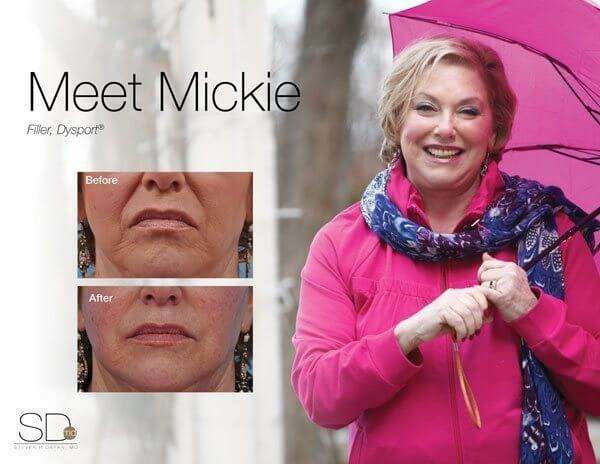 “Dr. Dayan is a conservative appearing person, very quiet and confident, and that made me feel confident,” says Mickie. “When I spoke with Dr. Dayan, it made me feel as if he knew exactly what I wanted to achieve, which was not a plastic face.” Mickie researched for about 3 years before deciding pursue injectables, but new products kept coming out. When Mickie called Dr. Dayan’s office, she had questions as to whether or not he would have the products that she’d read about. Mickie was told that though Dr. Dayan provides all of the most popular non surgical products such as Juvederm® and Dysport®, the products would only be used if they were right for her.

“I was not nervous before the treatment. I just felt that I was in the right place. Maybe I was a little concerned about the pain, and I was surprised that I did not make a sound.” Mickie has experienced very little bruising with her treatments. “Go with your inside feelings.” Mickie says that her procedures have made her feel “like a younger woman than I really am.”