When Nancy felt like her appearance was starting to look aged, she began searching for a board certified facial plastic surgeon in Chicago. A plastic surgeon in southern Illinois, who had previously worked in Chicago, directed Nancy toward Steven H. Dayan, M.D.. Nancy selected Dr. Dayan as her trusted medical provider on his recommendation for her facelift, brow lift, and blepharoplasty procedures. 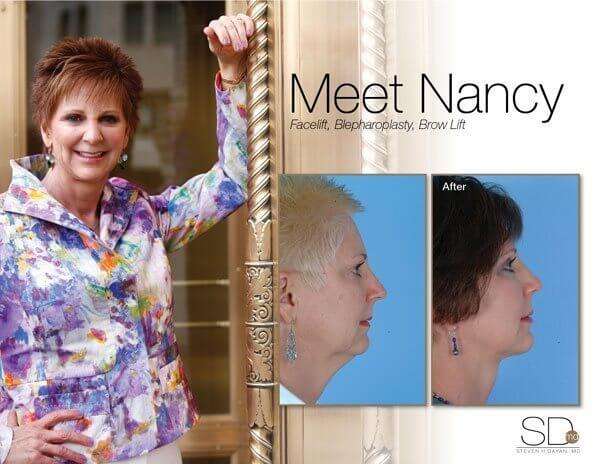 She knew that she did not want to appear fake, making Dr. Dayan’s signature style of creating natural yet remarkable transformations an excellent fit for her aesthetic goals. In 2006, Nancy received her facelift. Her mother had received a facelift at 50, so her family remained very unobtrusive during her process. They were already familiar with the routine.

Aside from some discomfort the first night after her surgery, she says she was “very surprised” by how “painless” the procedure felt. Only one week after the surgery, she began to see the effects of the procedure. “I feel good about myself. I feel younger,” Nancy says.

Nancy continues to return to the practice of Steven H. Dayan, M.D. to maintain her look. Not only has she been highly satisfied with Dr. Dayan’s work, she has also been impressed with his entire team, “Dr. Dayan’s staff is an unbelievable combination of talent!”